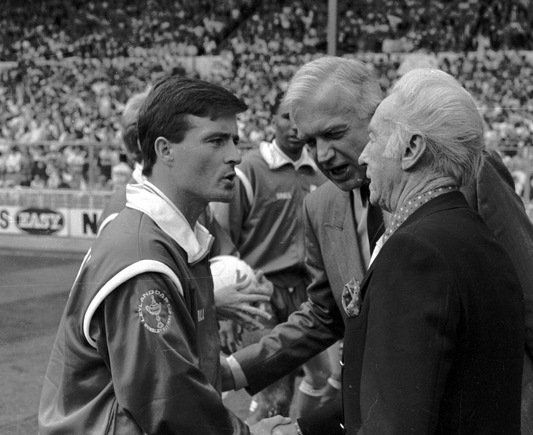 During this season we are going on a journey back in time, thirty years back in time to be precise, to a season that ended in a historic Championship and Rovers’ first ever trip to Wembley.

Following on from a stunning Part 11, where Rovers played leapfrog over our noisy neighbours AND secured the Championship on a sunny seaside trip to Blackpool, we now round the season off at our first EVER trip to Wembley.

Off the pitch it was reported that the successful management team of Gerry Francis and Kenny Hibbitt could be broken up as assistant boss Hibbitt had been shortlisted for the manager’s job at Walsall.

Sunday 13th May, just a week after the open top bus tour, Rovers staged a testimonial match for Vaughan Jones at Twerton Park and crowd of 4,786 turned up to see them take on a team labelled the Gerry Francis All Stars.

Tottenham Hotspur had been pencilled in for that game but withdrew at short notice.  The All Stars included former Rovers players Keith Curle, Gary Penrice, Paul Randall and Tim Parkin in their side and ran out 2-1 winners. Randall and Tommy Tynan scored their goals, while Devon White scored for Rovers.

Jones was presented with the Third Division Championship Trophy and the players received their Championship medals on a day when it was all about celebrating and not the result.

Preparations were continuing for the Leyland Daf Final against Tranmere Rovers, though they were being hampered by injuries to David Mehew and Carl Saunders. Mehew was nursing a thigh strain, while Saunders was troubled by an Achilles tendon problem.

Five days before their Wembley appearance it was announced that Kenny Hibbitt had been appointed as manager at Walsall. Initially it was thought he would leave the club immediately, but he was persuaded to remain until after the final and would take his place alongside Gerry Francis on the Rovers bench at Wembley.

As is always in the build up to a major game, almost all of the squad were the subject of press interviews and here are just a few quotes by some members of the squad, beginning with Ian Holloway; ‘I know City have always seemed to be the more fashionable club but we are knocking off their achievements one by one. I know our fans have had to take some stick from City supporters over the years but now they can hold their heads up high. As a local man I’m really pleased about that.’

David Mehew said; ‘I’ve been at Rovers for five seasons now and have two years to go on my contract and things are looking good. I was in the first team here almost straight away, as a substitute at Bournemouth. When I was at Leeds I was nowhere near their first team.’

Phil Purnell said he was ‘feeling fitter than at any time in the season,’ while kitman Ray Kendall looked forward to celebrating a 40 year association with the club a few weeks after the final and he spoke about the trials and tribulations of being a kitman whose home games were played in a different city giving rise, some years later, to the title of his autobiography ‘An Away Game Every Week.’

Goalkeeper Brian Parkin, born just a mile from Tranmere’s Prenton Park ground, said; ‘Defensively we have the best record in all four divisions. We have beaten Tranmere twice and while I know that means nothing on the day, it does show that we have coped with their style before.’

Jackie Pitt, former player, coach and groundsman, was also on his way to Wembley, on his 70th birthday and George Petherbridge would be there as well, celebrating his 63rd birthday the day before the final.

David Mehew declared himself fit for the big game and, with Carl Saunders also fit again, manager Francis had a full squad to choose from.

Final words before the game came from Gerry Francis; ‘I believe we are the fittest team in the Third Division, which could prove crucial in the last 20 minutes if it’s tight. It has paid off time and time again in a lot of our pressure matches.’

‘People talk about the spirit at Bristol Rovers but it was awful when I first came here. Now the players go out expecting to win. As an organised unit with skill intermittent within that system we are the best in the division. They cannot take that away from us.’

Rovers fans numbering over 31,000 were in the Wembley crowd of 48,402 but their side were beaten 2-1 by the Rovers from the Wirral and there was no fairytale double for them to celebrate.

For Gerry Francis it was the first time he had lost a match at Wembley, yet his side could so easily have won and, to a man they were certain that they had been robbed by referee Vic Callow.

Tranmere were in front after only nine minutes when Neil McNab’s throw in from the right was knocked on by Chris Malkin and Ian Muir executed a perfect half volley to beat goalkeeper Brian Parkin.

Rovers were fortunate not to concede again before the break and were indebted to a superb interception from Steve Yates to deny Malkin a shooting opportunity.

Rovers hopes suffered a blow a minute before the break when Ian Alexander was forced out of the game with an ankle injury which came from McNab’s late challenge. Paul Nixon replaced Alexander and played in a wide midfield role, with David Mehew moving into the centre to partner Ian Holloway and Andy Reece taking Alexander’s place in the back four.

Rovers looked a different side after the break and seemed energised by their half time  team talk from manager Francis. Their best spell in the game was rewarded with an equaliser in the 51st minute when Nixon’s cross found White at the back post. The striker’s initial shot was deflected back to him off of defender Steve Mungall and he made no mistake with his second effort, his left foot shot entering the net via the crossbar.

Seven minutes later, just when it looked as though Carl Saunders was going to put Rovers ahead, he was checked by Tranmere goalkeeper Eric Nixon as he tried to take the ball round him. Referee Callow simply waived play on and, just when they thought they were to be awarded a penalty, Rovers had to get on with it.

Saunders again went close to scoring on 70 minutes when his curling shot beat Nixon but hit the post and the chance was gone. Two minutes later it was all over as Jim Steel headed home from close range, after his marker Geoff Twentyman went to ground, following Muir’s cross from the right.

There were certainly suspicions of a foul by Steel and Twentyman said this afterwards; ‘As the ball came across I was clearly pushed from behind. As we went back for the restart I asked Steel if he had used one, or two, hands to push me’. His reply was; ‘Actually it was two, but I got away with it.’

Similarly, Saunders felt that he should have been awarded a penalty in the incident involving him and Nixon; ‘I definitely should have had a penalty. The keeper admitted the foul to me and said he was lucky to get away with it.’

‘The ref claimed I dived but I had already put the ball past the keeper so there was no need to attempt to claim a penalty. Referees can lose you the game and I think that’s what happened today. If he didn’t see the incidents he shouldn’t be in charge of a game at Wembley.’

Skipper Vaughan Jones was so incensed with those, and a few more, decisions, that he threw his loser’s medal away in disgust; ‘I did throw it away, but Devon White picked it up and gave it back to me. I suppose I’ll put it in the attic with the rest of my medals and stuff and my lad will take it to school. I don’t like collecting things anyway.’

Manager Gerry Francis who, after much deliberation about his future with the club, would eventually decide to stay had this to say at the final whistle; ‘It was a good match and great to see over 30,000 fans from Bristol creating a great atmosphere at Wembley.’

‘Although I was disappointed in the way we lost, all credit to John King and his Tranmere team. We played well in the second half and created the greater number of chances. When we equalised I honestly thought we would win the match.’

Before the players went off on a well deserved break Ian Holloway and Steve Yates, who had already been named Player of the Year and Young Player of the Year by the President’s Club, received the same accolade from the Supporters Club.