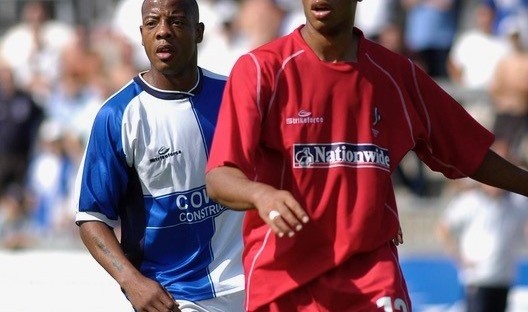 In our last article [available HERE] we had a look back to July 2004 to see what was happening in BS7 for the pre-season build-up, although we didn’t look closely at the actual games played in the run up to the 2004/05 season.

There were nine games played that summer and, strangely enough, only one of those games resulted in a win during the 90 minutes, though one more was won after a penalty shootout.

The first match of the Ian Atkins reign took place at Twerton Park against our former landlords, Bath City, in front of a crowd of 1,778.

New signing Paul Trollope skippered the side that played out a goalless draw and the starting lineup contained three triallists in defenders Jon Beswetherick and Liam Burns, plus striker Richard Walker.

Dave Savage and Jamie Forrester went close to scoring in the first half while Richard Walker and Ryan Williams might have scored after the break.

Among the substitutes used by Rovers were German triallists Thorsten Dinkel and Bernd Gagstatter as well as a 15 year old Scott Sinclair.

After the match Atkins said; ‘Credit to Bath because they were well organised at the back and in midfield and made things very hard for us. We haven’t really worked on our shape or pattern of play yet because we have had a couple of players missing with knocks and strains. But as a first runout it was quite useful.’

Two days after that match Rovers embarked on an overseas tour…to the Isle of Man for a week long tournament involving five other clubs.

The squad made their way to Liverpool by coach and took the ferry across to the Isle of Man where a local coach delivered them to their team hotel.

The schedule for the week was pretty tough. Rovers were drawn in a group along with Port Vale and Wrexham, while the other group was made up of Rushden & Diamonds, Carlisle United and an Isle of Man side.

Rovers were down to play Port Vale on the Monday and Wrexham on the Tuesday. The two group winners would meet in the final on the Saturday.

The game against Port Vale on Monday evening 19th July was played at Ramsey’s Ballacloan Stadium and the Gas conceded the first goal with 33 minutes on the clock, though they were down to ten men at the time as John Anderson had left the pitch with blood streaming from his right eye.

The goal came after Steve Brooker rose to head on a cross from the left, leaving Jeff Smith to nip in and nod home from close range.

James Hunt equalised for Rovers on 50 minutes when Vale goalkeeper Mark Goodlad spilt a cross from Dave Savage, leaving Hunt to slot the loose ball into the net from eight yards.

Eight minutes later Vale were back in front when Simon Eldershaw played in Brooker who chipped the ball over Kevin Miller and into the net.

Richard Walker levelled the scores ten minutes from time, when he volleyed a shot past Goodlad, thus forcing a penalty shootout to determine the winners.

Atkins, whilst pleased with the win, said afterwards; ‘We lost John Anderson with a cut eye, Liam Burns with a groin injury and Robbie Ryan after a tackle I thought was a disgrace. While it’s always nice to win, this is more about the players’ fitness than anything else and these injuries are something we could do without.’

Port Vale boss Martin Foyle would, later in his career, become assistant manager at Rovers under Dave Penney while former Rovers and City striker Lee Matthews was on the Vale bench.

The attendance for the game was given as 649 and Rovers lined up as follows.

24 hours later Rovers were in action again as they took on Wrexham in their second game of the tournament in a game played at Peel.

Rovers took the lead on the half hour mark when Steve Elliott set Ali Gibb free down the right and his cross was met by Richard Walker who scored from close range. Six minutes later Walker turned provider as he set up Junior Agogo to score the second goal from a tight angle.

Wrexham pulled a goal back in first half stoppage time, Chris Armstrong scoring from the penalty spot after Christian Edwards had brought down Brian Carey.

Armstrong scored his, and Wrexham’s second, just after the hour mark when he headed home a cross from Simon Spender, but Rovers wrapped things up when Steve Roberts put through his own goal following a Paul Trollope corner.

‘To put in performances like we have on the last two nights against two good teams is very commendable,’ said Ian Atkins who also added; ‘I thought our fitness levels were good and we looked strong and powerful.’

The 4-2 win saw Rovers through to the final where they would meet Rushden & Diamonds who had beaten Wrexham in the 2003 final.

Chris Llewellyn and Danny Williams, both of whom had appeared for Rovers in the previous season, both started for Wrexham while Rovers lined up as follows.

On a hot, sunny, afternoon at The Bowl, Rovers and Rushden and Diamonds played out a 1-1 draw in the final of the competition, though the trophy went to the Diamonds who won the penalty shootout 8-7.

Rovers conceded after only 22 minutes when Marcus Kelly was on target for the holders but Richard Walker, with his third goal in as many games, equalised in time added on to take the game to penalties.

Walker and Jon Beswetherick failed from the spot and even though James Hunt, Kevin Miller, Ryan Williams, Junior Agogo, Lewis Haldane, Craig Hinton and Christian Edwards all scored their penalties, it was left to Rob Gier to win the trophy for Diamonds with the final penalty of the afternoon.

Atkins said of this game; ‘In any competition you want to win, and we were the superior side over the 90 minutes. But in pre-season you lack sharpness in certain areas, and we lacked it in and around the 18 yard box.’

This is how Rovers lined up for the final.

Having travelled back to Bristol on the Sunday, there was very little time for rest for the Rovers squad as their next pre-season test took place on Tuesday 27th July, against Ian Holloway’s Queens Park Rangers in a testimonial match for Jamie Shore.

A Memorial Stadium crowd of 5,924 saw Holloway’s side register a 2-0 win on a night when Shore, who had undergone 16 knee operations in an attempt to rescue his career, wore a blue and white quartered shirt for the final time (even though Rovers wore their new sky blue strip for the first time!) and took a token kick off before watching the game.

Rangers dominated first half proceedings and took a 17th minute lead. Paul Furlong met Kevin Gallen’s corner but saw his header cleared off the line by Robbie Ryan, though the Rangers man followed up and netted from the rebound.

Rovers gave a better account of themselves in the second half but conceded again seven minutes from time when Tony Thorpe caught Christian Edwards in possession and created space for himself to beat Kevin Miller from 12 yards.

Shore said after the game; ‘I just want to thank everyone who turned out to support this evening. I didn’t expect those sorts of numbers and it was a fantastic way to bow out.’

As well as Holloway two more former Rovers players, Jamie Cureton and Marcus Bignot, were involved and turned out for Rangers while Rovers lined up as follows.

Two days later Atkins and his squad headed up the M5 for a game against Conference North side Moor Green where a Rovers side containing a number of triallists played out a 1-1 draw.

Rovers fell behind on 26 minutes when Daire Doyle hit a 20 yard free kick beyond the reach of goalkeeper Ryan Clarke. The equaliser arrived just before half time when Richard Walker’s ball in from the right was volleyed home by Lewis Haldane.

Among the triallists on show for the Gas were Guiseppe Aquino, previously with Sienna, ex Grimsby player Simon Ford and Liam Burns, the former Port Vale defender who had been training with the club and who had travelled to the Isle of Man. In midfield were former Derby and Tamworth player Lee Wilson and ex QPR player Jack Perry.

Atkins said after the game; ‘A lot of triallists were thrown together for this game, while players like Dave Savage and Richard Walker said they felt they needed another runout, which is the reason they were playing.’

This was how Rovers lined up.

Game number seven of the pre-season build up was against Swindon Town at the Memorial Stadium on the last day of July and the sides played out a 2-2 draw.

The Wiltshire Robins took the lead on 12 minutes thanks to a stunning strike by Brian Howard but Rovers equalised when Junior Agogo headed home from a Stuart Campbell corner.

Rovers went ahead from the penalty spot after Agogo was brought down by Jerel Ifil who would, later in his career, play three league games for Rovers, and Jamie Forrester scored the spot kick.

Swindon, though, got back on level terms 13 minutes from time when substitute Andy Caton sidefooted the ball past Kevin Miller from six yards.

Forrester said afterwards that he was looking to forming a strike partnership with Agogo in the season ahead; ‘Junior is on fire at the moment and he did fantastically well to get the penalty. I’m sure it won’t be the last one he gets for me this season. Playing with him is great because he’s lightening quick. If he keeps playing like that, he’s going to be vital for us.’

With the season just days away, there were two more friendly fixtures to fit in before the opening game against Mansfield Town.

On Tuesday 3rd August Rovers made the short trip to Cossham Street where they lost 1-0 to Mangotsfield United, Scott Hendy scoring the only goal of the game 18 minutes from time.

Two senior players, Steve Elliott and Lee Thorpe played the opening 45 minutes and both came through unscathed. Elliott had been suffering from tonsillitis while Thorpe was returning from injury and it was hoped that both would be fit for the Mansfield game.

Elliott said after this one; ‘I probably need another 45 or 60 minutes under my belt. Hopefully that will come on Thursday (a match against Clevedon Town) and I will be able to show that I’m fit enough to play on Saturday. I lacked a bit of sharpness, but that will just come with games. In terms of my lungs and my legs, I was OK.’

The side that took on Mangotsfield was as follows.

The hastily arranged friendly against Clevedon Town, at the Hand Stadium, ended in a 2-1 win for the home side with Simon Ford on target for Rovers.

Unfortunately, I don’t have any more details of this match, either in the way of a match report, programme or teamsheet. However, I assume that Elliott and Thorpe were involved for part of the game as both were fit enough to be on the bench at Mansfield, for the opening game of the season, two days later.