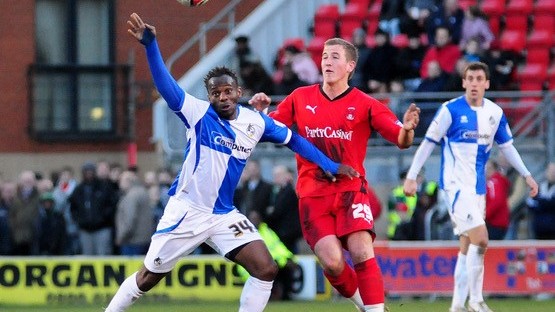 Kane purchased the sponsorship of Orient’s 2020/21 kits and their home strip will carry a message of thanks to frontline workers tackling the coronavirus pandemic, while mental health charity Mind and Haven House Children’s Hospice will see their logos on the club’s two change strips.

Why Orient, you may ask; well, the Spurs and England front man is a local lad and was a 17 year old on loan with the Brisbane Road outfit in 2011 when he scored five goals in 18 appearances for the O’s.

‘I was born and brought up only a couple of miles from Orient’s stadium and I’m really happy to give back to the club that gave me my first professional start,’ said Kane, who went on to say; ‘It also gives me a platform to say a big thank you to the many frontline heroes and charities out there who provide care and support during these challenging times.’

The club have said that 10% of the proceeds from every replica shirt sold will go to the cause featured on the front.

Orient Chief Executive Danny Macklin said; ‘We wanted to say thank you for the exceptional hard work and dedication of the frontline heroes during this pandemic and also bring attention to the other charities out there. Who are all suffering financial loss due to the pandemic.

‘We are in uncertain and worrying times across the world but, thanks to their efforts, we will get through this together. Thank you for your amazing support and generosity; you are a true role model for the modern game.’

Mention of Kane’s record at Brisbane Road reminded me of the time he played against the Gas when he scored twice and was only on the pitch for 20 minutes!

Rovers were enduring a torrid time in League One and went into this game, on 12th February 2011, having lost their last four games.

They made a poor start to this match, conceding after only five minutes when Jimmy Smith held off the challenge of Danny Coles before finding the bottom corner of the net.

A 52nd minute own goal by Orient’s Jason Crowe gave Rovers supporters false hope that they might go on to take something from the game.

Kane was sent on with 20 minutes of the contest remaining, replacing Scott McGleish who was to join Rovers that summer and it didn’t take him long to get on the scoresheet.

He beat our Daniels from a their Daniels (Charlie) cross 13 minutes from time and five minutes later slotted home his second, again after a Daniels cross, from close range.

It was a poor performance from a Rovers side low on confidence under manager Dave Penney and this latest defeat saw them slip to the bottom of the League One table.

Afterwards Penney said; ‘I sound like a record because I keep saying the same things after every game. We can’t defend, it’s as simple as that, and we are letting goals in for fun.

‘No matter what work we do, we keep letting goals in and the ones we conceded today weren’t particularly good, but every time the ball comes into our box it looks like the opposition are going to score.

‘It’s not the same personnel because different people keep letting us down at different times. But some of the mistakes are Sunday League standard and if we carry on like this we will be relegated.’

Prophetic words from a manager who was in charge for only 13 games, because Rovers were relegated at the end of the campaign though joint caretaker managers Stuart Campbell almost performed a miracle in keeping them up. I wonder what would have happened had they be placed in charge earlier?

For the record, this is the side that lost to Orient and Harry that February day in 2011.

I wonder if Kane recalls the day that he scored twice against the Gas; the answer is probably yes, as strikers have an uncanny knack of recalling every goal they score in their career, but conveniently forget the many they miss!

His gesture is one of many made by footballers all across the country, from the Premier League and clubs and players across the leagues, all doing what they can to help out at this time of national crisis.