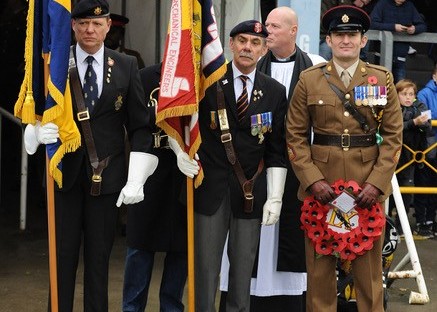 Today, of course, is Remembrance Sunday 2019 and a day when Rovers welcome National League leaders Bromley to the Memorial Stadium for the first ever competitive match between the clubs.

They might never have met, but there are connections as I discovered when I delved into the history books.

Ijah Anderson, Michael Boateng, Bradley Goldberg, Ben Swallow, Adam Cunnington and Alex Wall have all, at one time or another, been on the books of both clubs.

Of those six players, four are still playing; Goldberg for Welling United, Swallow for Merthyr Town and Cunnington and Wall for Hemel Hempstead Town.

There is, though, one more connection and whilst his playing days are in the past, Rovers Chairman Steve Hamer played for Bromley. In early 1976 he returned to this country and signed for today’s opponents, having played in South Africa.

His stay was a short one, though as at the beginning of the 1976/77 season the central defender became player/manager of Corinthian Casuals.

Rovers’ FA Cup record in recent seasons has been, for want of a better word, abysmal. The last time we reached the third round of the competition was back in 2013/14 when a tepid performance against Birmingham City at St Andrews resulted in a 3-0 defeat.

Home ties against lower league opponents haven’t gone well, either, and we have been beaten by non league sides in three of the last four seasons. Chesham United (2015), Barrow (2016) and Barnet (2018) have all won FA Cup ties at The Mem.

The side that beat us in 2017, Notts County, are now a non league team themselves, so it’s almost four out of four!

In the post Second World War period Rovers have played a total of 14 games on Remembrance Day, winning six, losing four and drawing four yet only one of those games was in the FA Cup.

That was in 2007 when we drew against Leyton Orient at Brisbane Road, where Rickie Lambert scored the goal that earned The Gas a replay.

The best individual goalscoring feat in games played on this day in the post war period belongs to Harold Jarman, who scored a hat trick in a 4-2 win against Bradford City in 1970. Harold, in fact, is the club’s top scorer on this day, with four as he also scored in the 3-1 win against Notts County on this day in 1962.

Only two other players, Alfie Biggs and Ray Mabbutt have scored more than one goal on this day. Biggs scored twice against Swansea Town in a 3-2 win on this day in 1956, while Mabbutt’s double came in a 3-3 draw against Tranmere Rovers in 1967.

Remembrance Day is a time for reflection as we remember those who made the ultimate sacrifice in the Great War of 1914-1918 and in all conflicts since.

Previous articles have mentioned those with Rovers connections who were killed in action in the war to end all wars; they were John Hardman, Walter Gerrish, Joe Hulme, Albert Rodgers and Harry Phillips, all of whom had played first team football for the club. Reserve team player William Brewer also lost his life.

Peter Roney, also a first team player, with 178 Southern League games for the club to his name served in the War. He was with the Machine Gun Corps and his time on the front line affected him deeply. Today he would almost certainly have been diagnosed with Post Traumatic Stress Disorder.

His final game for Rovers was in a 3-2 home win against Plymouth Argyle on 17th October 1914 and although he survived the War, he never appeared for Rovers again and died in 1930 aged just 43.

He is pictured here in a team photo taken for the 1913/14 season, third from the left on the back row. 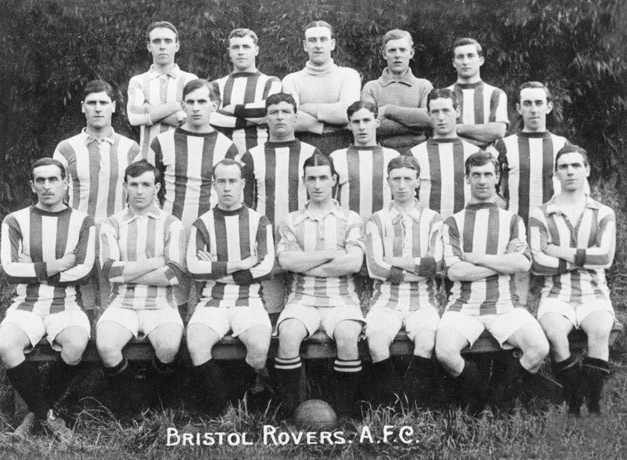 If you are fortunate to be attending this afternoon’s match, then take a short time out to remember that the reason you are able to is because so many made the ultimate sacrifice to enable you to do so.