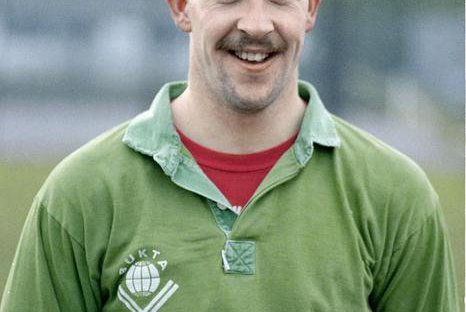 30 years ago an inspired quadruple signing started Rovers off along a road that led three seasons later to an historic Third Tier Championship.

In the summer of 1987 ex-England captain Gerry Francis swept back into Rovers and signed four players who between them went on to rack up 721 League appearances for Rovers and help create the legend of King Gerry.

It’s easy to re-write history and assume these transfers were safer than houses but in 1987 all of them were serious gambles.

When Gerry took over the situation at Twerton Park was dire and the pot was empty (when has it ever been full at Rovers?). But it happily forced Gerry to wheel and deal and use all his experience to find cheap cast offs and polish them up into slightly less cheap cast offs.

For once in football folklore a seemingly apocryphal story is actually true. Vi Harris, the Rovers tea lady, really did ‘discover’ the big Cornishman Nigel Martyn whilst on holiday in Kernow, playing for his local team, St. Blazey.

She nagged the new manager so much that he eventually agreed to go down to watch him play, but whilst he liked the look of him Gerry knew the cash strapped Rovers board wouldn’t want to fund another goalie when Timmy Carter was doing fine.

Nigel was earning £100 a week working in a warehouse so not unreasonably asked for £120 a week in order to take a leap of faith at Rovers. With very little money in the pot Gerry had to wear both him and the Board down, finally getting his man for just £105 a week! Hardly two years later Crystal Palace made him the first £1m goalkeeper in England.

Five days after Martyn arrived Andy Reece entered the building. Kenny Hibbitt had apparently spotted him playing for Willenhall Town FC in Midlands football and whilst Reecey’s story may have been the least colourful of the four signings he was probably the most influential in the long run: the midfield rock who enabled others to play their game.

The season had already started when Ian Holloway and Devon White joined on the same day, 21st August 1987.

In his two years away from Rovers ‘Ollie never quite settled anywhere, spending less than a year at Wimbledon and just over a year at Brentford, before finishing up with five games on loan at Torquay United. His value was dropping with each successive transfer and Gerry Francis actually loaned cash strapped Rovers the £10,000 needed to bring him back.

Whilst Francis had inherited the skill and nimbleness of Gary Penrice and David Mehew up front, he wanted an understudy for Robbie Turner, the Jekyll to their Mr.Hyde. They say you never forget your League debut for a club; well Gerry certainly never forgot something about his on 14th September 1985 against Lincoln City at Eastville. He may not have remembered the name of the gangly, unorthodox sub who came on to reek havoc in the Rovers’ back line, but he found it out by boldly calling up the Imps themselves.

Whilst the answer from the other end of the line, ’Devon White’, was clear enough, where the man now played, two years later, was not. Big Dev had slipped back into non-league but after some detective work Gerry got hold of him at Shepshed Charterhouse, brought him down for a trial and offered him a two year contract.

Dev went on to score 18 goals in that debut season whilst Robbie Turner only managed three more League starts.

Rovers struggled at first with Gerry in charge, still lying in 20th place as late as March 1988, but the team suddenly began to gel and were propelled up to an eighth place finish. End of season momentum certainly proved to be important and Gerry took what sadly nowadays seems to be the unfashionable way to success, slowly building upwards with a play-off final in the 1988/89 season, and then winning the title in 1989/90 and going on our first ever trip to Wembley to boot.