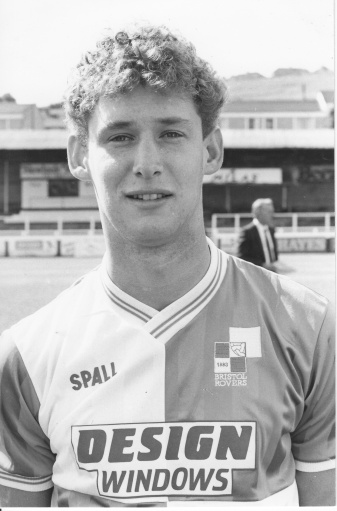 The Bristol Rovers Former Players Association (BRFPA) are delighted to announce that Billy Clark has agreed to be our first ever President.

Billy will be involved in as many BRFPA events as possible, and will be our figurehead: a fine example of loyalty and determination.

Billy is one of the few Rovers players in the modern era to have qualified for a testimonial, having spent just over a decade at Rovers, starting during the early days at Twerton Park and finishing with the first seasons at the Memorial Ground. His testimonial in 1998 saw West Ham United win at the Mem courtesy of Ian Wright’s first ever goals for his new club. 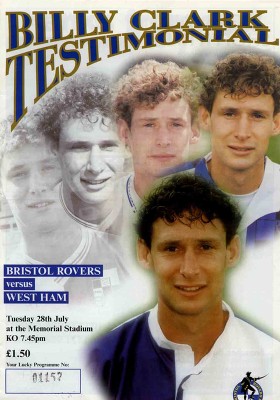 As a youngster from Christchurch Billy had trials at most of his home area clubs (Southampton, Portsmouth, and even up to the dreaded Swindon Town) before settling at Bournemouth for three years.

In October 1987 Gerry Francis needed a defender to plug a gap and found 20 year old Billy available on loan. He went straight into the team for his debut against Chester City and joined permanently just after the New Year.

As players came and went who could have known that Billy would loyally stay and stay and stay, amassing 295 senior appearances overall, and netting 17 goals, including an unusually large tally of seven in the 1994/95 season. That season also resulted in an appearance at Wembley, for the Play-Off Final, after having missed the 1990 Leyland DAF Final through injury.

Although history often unfairly remembers him as ‘The Judge’ because of the enormity of time he spent sitting on the bench, his later years with Rovers saw him as a first choice centre back alongside Andy Tillson, and his earlier years could have been very different if it wasn’t for injuries and the emergence of Steve Yates.

Billy was never dropped or injured in that first season, missing just three games between the loan spell ending and the permanent spell starting, and he also started the 1988/89 season as first choice, appearing alongside Geoff Twentyman for 10 of the first 12 league games. But Yates usurped him as the partner of choice and it wasn’t until the four post-season play-off games that Billy received his next starts, courtesy of Gerry Francis punishing Twentyman for defying orders not to attend his brother’s wedding. Billy repaid the faith in him by scoring the vital first goal at Craven Cottage in the semi-final second leg. With the Pirates now 2-0 up on aggregate and Fulham needing to chase the game the relaxed Rovers team romped to a 4-0 win.

With injury scuttling the entire 1989/90 promotion winning season, and the formidable Yates and Twentyman partnership continuing into the higher division, Billy held the unenviable record of not starting a League game between October 1988 and March 1991. The scene of his return, in front of 22,000 at Ashton Gate, was hardly a setting for the fainthearted (or your first ever game in the second tier of football!), but it was a measure of the man that Billy easily slotted back into the team and went on to clock up 61 more games at that elevated level.

1997 sadly spelt the end of a beautiful love affair though, with the emergence of young Tom White, the curious arrival of veteran bruiser Brian Gayle, of course Andy Tillson still going strong as captain. Add to that the £150,000 summer splurge on Woking’s Steve Foster and Billy was considered surplus to requirements by Ian Holloway. After trials and loans elsewhere he ultimately made a permanent move to Exeter City on 31st October 1997, giving him a couple of weeks of service above an entire decade. It was hardly the best exit in history, but at least Billy’s final Gas appearance hadn’t been his ninth minute sending off at Chesterfield on 11th January 1997, but was instead a brief sub appearance at Watford on 18th March.

Billy faced his old team-mates three times for the Grecians but fittingly was never on the winning side. Two years at Forest Green Rovers followed, culminating in playing at Villa Park in the FA Vase Final, before moves to Newport County, Weston-super-Mare and most notably Clevedon Town, where he took up coaching and even had a time as caretaker manager.

In 2007 Billy returned to Rovers for almost two years as an Under-18 coach before becoming the Academy Coach for our old friends at Twerton Park.  Billy’s footballing life had come full circle and he remains at Bath City today, yet another example of an ex-player who came to our loveable area and has never left.

Article by Martin Bull.  Thanks to Mike Jay & Stephen Byrne for letting me use their official Player Profile of Billy and the use of the black & white press photo of a young Mr.Clark.