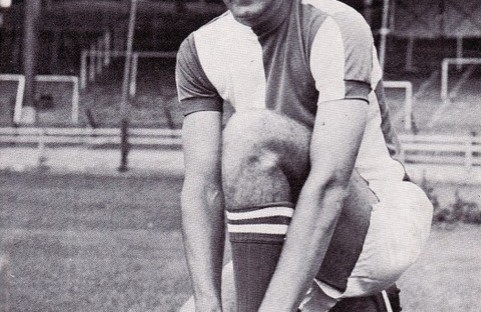 And a rock feels no pain,

And an island never cries”

If there was a literal rock in the 134 year old story of Bristol Rovers it has been a man called Stuart Taylor, who, with 546 League appearances holds a record that will never be broken. This is a man who spent his entire professional career with Rovers (627 appearances overall), a man who holds the club record for consecutive League games for an outfield player (207 between 6th September 1968 and 13th January 1973, rising to 251 consecutive games if you add the cup matches), and a man who was ever present in both League and Cup games in four seasons (1969/70, 70/71, 71/72, and 73/74) and who would have had another in 1968/69 if he hadn’t missed a solitary game (which incidentally ended up in a 6-1 defeat!), and yet another in 1978/79 if he hadn’t been rested for the final game of the season.

To give readers an idea of the longevity of his dedication to Rovers, Stuart’s debut saw him in the same side as Ray Mabbutt, whereas his final appearance saw him yoked in central defence with Ray’s son, Gary Mabbutt. In 15 seasons Stuart never made even one solitary appearance as a substitute; not because subs didn’t exist but because he was too busy being on the pitch the majority of the time. 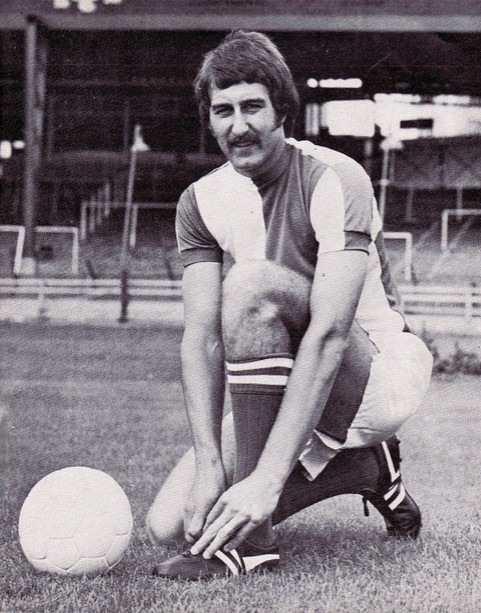 How did this journey begin?

The Simon & Garfunkel version of Paul Simon’s song ‘I am a Rock’ was recorded on 14th December 1965. Just days later Stuart signed professional terms for Rovers. I am not convinced the two events are related but I like the notion they could be.

With Rovers in mid-table security at the end of that season, Taylor was handed his debut on 26th April 1966, just a few days after his 19th birthday. It came at Workington of all places, in front of only 2,557 spectators, the middle visit of only three Rovers voyages to the far flung Borough Park.

A tiny Cumbrian coal and steel town was hardly a fitting place for the birth of a legend, but an Eastville debut followed on the final day of the season, a narrow 2-1 loss to Hull City, and Stuart never looked back.

A first goal came at Grimsby Town in February 1968 and rather surprisingly six more came in the remaining 17 matches of that season, suddenly propelling him into official goal machine territory. Such a return never ensued again but he always knew where the goal was and scored in every season bar two until saying his final farewell.

Fred Ford became Rovers manager in April 1968 and had such belief in youth (and a talent for spotting it) that he chose 19 year old apprentice Larry Lloyd to partner the now first choice Taylor, himself only 18 months senior. From his debut at the start of the 1968/69 season Lloyd played 51 consecutive League and Cup games for Rovers (all but one of them alongside Taylor) before being whisked off to Anfield by Bill Shankly. The fee, £55,000, was a then record for a Rovers player.

Taylor never got his own big move although there was speculation at times. Some clubs apparently concluded that he was ‘too nice’ and in a brutal era didn’t make full use of his exceptional frame.

Stuart however played against nearly all the biggest clubs of the era and at the greatest grounds, usually in front of at least 25,000 fans – Old Trafford, Elland Road, White Hart Lane, Villa Park, St. James‘ Park, Roker Park, Hillsborough, the Baseball Ground, the City Ground, Stamford Bridge, and Goodison Park in front of over 55,000 in 1969, where the canny Shankly had been eagerly watching the young Rovers centre back pairing.

Alas I never got to watch Stuart play although I did get close. As far as I can work out my sole Eastville match was the final game of the 1979/80 season against West Ham United. Stuart’s final game for Rovers had been less than two months earlier, a 3-3 draw against Preston North End in March 1980.

The big man reportedly had an offer to go to Chelsea in May 1980 but instead opted to stay local and become Bath City’s Player-Manager (79 appearances), finishing a very impressive sixth in the Alliance Premier League (the Fifth Tier) in his debut season, but leaving in April 1982 after a harder second season, returning to Rovers to work as a Promotions Manager.

13 other footballers with the surname Taylor have played for Rovers, including two well-known ones from the 1990’s; Gareth ‘don’t mention Wembley’ Taylor and John ‘not Duran Duran’s bass player‘ Taylor (although there was actually a similarity). But if you put all of their Rovers’ league starts together they still come up over 100 short of Stuart’s 546.

After football was over Stuart regularly watched Rovers from the terraces and on 7th March 2015 Stuart, alongside Steve Yates, the best central defender I’ve seen in my days watching Rovers, were worthy recipients of the Harry Bamford Trophy; a recognition of sportsmanship and fair play. Strangely enough it was Bamford’s appearance record that Stuart broke; a record that had stood since Harry’s untimely death in 1958.

Sadly Paul Simon was wrong about the rock though. Rocks do feel pain and islands do cry.

Stuart is currently fighting an aggressive case of Lewy Body Dementia with frontal lobe damage that could well have been caused or exacerbated by years of heading heavy balls.

Rovers stalwart, Ray Kendall, related in his memoirs, ‘An Away Game Every Week‘ (Breedon Books, 2001), the story of a dreadful 17 hour journey to Newcastle United in March 1979 where, “the fog, ice and snow was so bad… that we had to have somebody walking in front of the coach to guide the way”. It comes as little surprise that Ray ends the story by remembering that “Stuart Taylor was the great hero of the day, seeming to walk for miles”.

I imagine Mr. Taylor’s battle today will be just like that of 1979, taking on a harsh and challenging journey with the minimum of fuss and his customary gentle determination.

You are the rock.