Undeterred by only being formed in April 2017, the BRFPA dived straight into work and decided to organise its first major event for September!

The project chosen was that staple of football players; a Golf Day, at the beautiful Players Club at Codrington, near Bristol.  Supporters paid to play a round of golf with a former player (or BRFC Chairman Steve Hamer, the best interloper since Saki’s wolves, and a man chivalrous enough to have paid his own way).

For golfers the day started with a light brunch (a.k.a. bacon buttie), tea/coffee, practise facilities, a round of golf, and some decent weather for most of the time (specially ordered by DC to make up for crying off at late notice).

Non-golfers could also pay just £20 to join us for the evening session which kicked off with a two course dinner followed by several golf trophies and presentations, and ended with an auction and raffle of Rovers memorabilia and various weird stuff the BRFPA Committee and other generous supporters had found in their lofts.  All the proceeds are going to help buy some comfort for Rovers’ record appearance holder Mr. Stuart Taylor whose aggressive case of Lewy Body Dementia has forced a move into a residential home that can give him the care he now needs.  We were staggered by the generosity of the 70 people present, as was Stuart’s wife Pam and his granddaughter Emily, who witnessed what the ‘family’ we call Gasheads and Pirates can do when mobilised.

The prize for funniest looking trophy went to this quirky cup / flower holder / yard of ale receptacle (delete as applicable), which our hospitable Golf Day sponsor, Blue Blood Syndications, had discovered in an auction fetching the tidy sum of minus £7.  Yes, the auctioneers paid them to take it out of their sight.  Engraving it later tripled its value and the crane needed to lift it up cost us £1,200 to hire, but heh, it was minus £7 to buy so we were surely quids in… er… weren’t we?!

The silverware (and glassware)

If my Gran had her way the inscription on the candlestick holder would have read ‘careful, you’ll poke someone’s eye out with that thing!’.  It was actually engraved ‘BRFPA Annual Golf Day’ and is destined to be our marquee trophy handed down year after year to our Golf Day victors, or until it gets lost (pencil a new one in for 2019 then…).

The first team to ever hug it definitely did not include Captain Gas who hacked his way to a record score of 212 over par, but were our Team Winners, SM Gauge, featuring former Gas terrier David Hillier (see photos below).  They won by the narrowest of margins, on countback, from Team Trident, featuring Bob Bloomer, with Third placed Tony Cockayne, and his team of former Pirates (Pete Aitken, Tom Stanton & Paul Tovey), just one point behind.

The Longest Drive Trophy was won by Dan from SM Gauge (2.9 miles apparently) 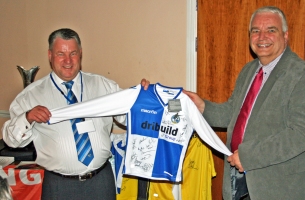 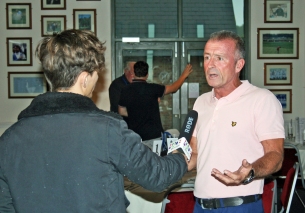