On Friday 7th December 2018 Rovers fans were able to pay less than a tenner to indulge themselves in a rare chance to meet and listen to many of the men who led us to our first trip to Wembley and earned that famous promotion on 2nd May 1990!

Our 1989/90 Champions & Wembley Night aimed to not only give Rovers supporters a memory of the stunning 1989/90 season, but could also offer Gasheads a humble and affordable chance to meet some of the heroes of our famous championship winning squad.  No dress code, free parking, wheelchair accessible, an affordable bar and a trip to darkest Yate.  What’s not to like 🙂

Whilst we have always supported the club by holding events at The Memorial Stadium, and will continue to do so whenever possible, including our big 2019 Dinner, we also felt the need to widen out and offer a different event in other Gashead territory and in down-to-earth community facilities.

So we dragged midfield enforcer Andy Reece down from Brummie land, target man Devon ‘Bruno’ White from his native Nottingham and even hitched a ride on defensive rock Steve ‘Scooter’ Yates’ airplane from sunny Crete.  Meanwhile top scorer David ‘Boris’ Mehew could almost walk to Yate (if only he’d put in the training…).

Between them our quartet had made over 1,000 Pirate appearances and scored 158 goals, so it was quite easy for them find enough to talk about whilst being interviewed by Keith Brookman for almost an hour, and then after a ‘comfort’ break (a.k.a. a pint and a chicken in a basket), to field questions for another hour from the 140+ Gasheads present, most of whom only paid a princely £8 to be entertained for several hours. 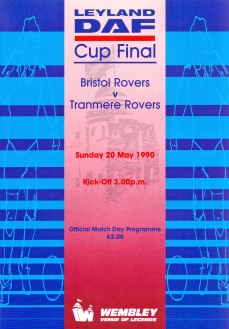 Our Chairman, Tony Mills, led this Q&A section, which somehow included a fittingly theatrical rendition of ‘Little Yellow Bird’ by Andy Reece.  Reecy certainly has the stories (if not the singing voice…), Boris has the gift of the gab, Bruno has the one liners, and Yatesy topped the show when delivering a beautiful soliloquy about Darrell Clarke and his beloved Rovers.

Although this was never intended to be a massive reunion from that Champions & Wembley visiting season, other players from the squad, including BRFPA President Billy Clark, Bob Bloomer, captain Vaughan Jones, Brian Parkin, Phil Purnell and Geoff Twentyman also came and chipped in as well.

There will hopefully be a right time and place for a full reunion in the future, maybe a 30th Anniversary event in the summer of 2020?

In fact so many people helped, including not only our hard working Committee and the legendary Andy Warren at Screen Soccer (who kindly provided us with a special backdrop of highlights from the season), but also Bath Ales, and Bob Monro and all the great people at the Shire Way Community Centre.

The raffle raised almost £300, which we pledged to donate to the families of two recently departed former players, Kevin Austin and Joe Davis.  Kevin’s family have asked us to donate it to St. Luke’s Hospice in Sheffield.  Joe’s is to be confirmed later.

Three of the four players also joined us at the Doncaster Rovers match as guests of the club and were warmly welcomed by thousands of supporters.  We won’t talk about the result though…